Of the approximately 600,000 charities registered with the Not for Profit sector, 6,000 new entrants were registered between December 2012 and December 2014. A compliance report issued in June 2015 by the Australian Charities and Not for Profits Commission highlighted the risks currently facing the sector[1].

The ACNC report Charity Compliance Report December 2012 – December 2014 and beyond identifies that in those two years the most common complaints it received against charities concerned:

The key focus of the regulator’s compliance work for 2015/2016 will entail charities operating overseas, charities that provide private benefits to their responsible persons or associates and charities that are involved with illegal activity or tax avoidance.

Operating overseas is a significant area of increasing risk. Australia’s non-government aid and development organisations spend around $1.3 billion annually, with approximately $875 million coming from public donations. An ACNC media release dated 29 June 2015 noted that over 4,000 Australian charities operate overseas and found the risk that funds are used to finance terrorism most alarming3.

Risks associated with charities operating overseas include the payment or receipt of bribes, facilitation payments and terrorist financing. This can result in significant penalties in Australia and, subject to jurisdictional matters, the host country and other countries in which the organisation conducts business; added to which is the reputational damage, which can have a far greater impact.

Closely mirroring the ACNC findings and comments regarding risks of terrorist financing, the Australian Transaction Reports and Analysis Centre (AUSTRAC) 2014 report, Terrorism financing in Australia 2014 noted “the integrity and work of non-government organisations such as charities and humanitarian groups can be seriously undermined if they are misused as a cover for terrorism financing activity”[2]. It reported that some Australian charities have been used to raise funds for terrorist groups by:

In April of this year, the Financial Action Task Force (FATF) and the Asia/Pacific Group on Money Laundering (APG) together issued the Anti-money laundering and counter-terrorist financing measures – Australia – Mutual Evaluation Report.

FATF, based in Paris, is an intergovernmental body that sets standards, recommendations and measures for combating money laundering on a global scale. APG, based in Bangkok, is an international organisation working in research, policy development, education and evaluation on anti-money laundering and counter terrorist financing. Australia is a member of both bodies.

The report indicates increasing risks of financial crime impacting Australian charities and other Not for Profit organisations through money laundering and counter terrorist financing. While generally a very positive report on Australia’s response to the threat, it states that Australia has failed to comply with FATF recommendations in terms of sector-wide risk assessment, outreach to Not for Profit organisations and measures to be applied to those organisations identified as high risk[3]. The report recommended the following priority actions:

Australia should implement a targeted approach in relation to preventing NPOs (non-profit organisations) from TF (terrorist financing) abuse. As a first step, Australia needs to undertake a thorough review of the TF risks that NPOs are facing [beyond the issues already covered in the NTA (National Threat Assessment) and the potential vulnerabilities of the sector to terrorist activities.[4]

3 The Australian Council for International Development,

Find out more about the rising risk of fraud and corruption in the charities and Not for Profit sectors: 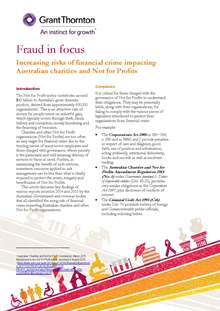