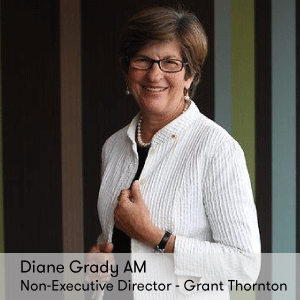 Being a pioneer is something Diane Grady is used to. When she came to Australia in 1979, she was the first woman outside the US to be elected to McKinsey's global partnership.

She was the first female partner in the firm to have her first baby, then the first to have her second, and also the first to go part-time. But being the first didn’t equate to – as she’d hoped - waves of female leaders following in her footsteps and in 1994 when she looked behind her, what she saw caused her great concern.

“It was a wasteland. The pace of change was glacial.” She says. “There was one other woman who was elected just after me, but ten years before the next woman was elected. It was obvious that time wasn’t going to fix this imbalance and it was also clear that good intentions weren’t going to fix it either.” She says.

So, Grady set herself two goals, which to this day she still strives to achieve.

“The first: for any organisation I was involved with, I would do everything I could to try to make sure they did a better job allowing their people to realise their potential. I saw many examples where people went home with a pay cheque and not much more.”

And the second goal?

“To do everything I could to help promote opportunities for women leaders.” Says Grady, who was made a Member in the Order of Australia in 2009 for exactly that - her contribution to business and for the promotion of women leaders.

“Unless we have more women, you are not going to have the talent pool of directors down the track."

Seems straight forward. But Grady says there are some significant challenges in making this happen faster and more broadly across industries.

“The promotion of women relies, to a certain extent, on women putting themselves forward. And this is one of the biggest challenges.”

“Women tend to underestimate their competencies and as a result they often don't reach for roles that they should be trying for.”

Grady believes it’s crucial to find roles where there is an opportunity to grow.

“This goes for both men and women, but based on evidence it’s clear something many women have to learn is that: stretching yourself is absolutely fundamental and, it’s OK to not be perfect.”

While there is an onus on women to put their feet forward more - even if it goes against their usual modus operandi -  Grady says there is also a huge responsibility for organisations to lay the foundations and create opportunities for diversity, especially at the top level.

“The real issue, when it comes to gender diversity, is in the executive ranks. When I became president of Chief Executive Women, we did a lot of research and produced a CEO kit to help organisations understand what it was going to take to attract, retain and develop female talent across all levels, but particularly up the ranks into executive level.”

Through this process Grady helped many businesses come to realise that there was no silver bullet in achieving diversity goals.

“A lot of companies were frustrated because they create all these wonderful policies - flexibility policies, maternity policies - and they wonder why nothing happens.”

According to Grady, nothing happens for these firms because it’s not just a policy that matters.

“Fundamentally it is culture that determines success or failure. If you feel valued, then you have the willingness to go the extra mile and the self-confidence to believe you can do it.”

Her words sparks a memory. She rewinds the clock to 1979 and shares a tale which, it’s clear, has shaped her significantly.

“I didn’t have any visible women when I came to Australia, but I did have a managing partner who gave me opportunities, he wasn’t afraid to put me in front of the most important clients.”

She recalls walking into the board room of a major client: “It was the late 1970s or early 80s, and as I entered the room my manager said “You do the presentation!” This was unheard of and I thought: OMG! But it was such a vote of confidence that I could do it.”

Under the surface of this story is something of great significance. It isn’t just about a boss who gave her an opportunity or two. It represents an approach that underpins Grady’s thoughts on the single most important thing businesses can do today to change the diversity landscape for the better.

“Businesses need to ask: ‘how can we get our leaders taking more responsibility for giving women more opportunities?’”

“By that I mean not opportunities in the backroom, but opportunities to present to clients, be in key client meetings, to observe and be part of real important interactions with CEO’s of clients.”

“In terms of what we can do going forward, the biggest thing I see working is asking the major senior leaders in companies to report to the board on their statistics with respect to diversity - gender diversity in particular - their actions, and even more importantly report outcomes from the initiatives they are taking.”

“When businesses have taken this approach,  when the leaders have to stand in front of the board and look them in the eye, we see change -  from being just lip service to these leaders having a real understanding of how diversity is critical to the success of the business.”

Before this approach, she says, many senior executives thought they had meritocracy and they couldn’t see that merit was a view through a certain set of lenses, or biases.

“They couldn’t explain why they were bringing in these great women who never went anywhere.”

“But, when you have partners exposing highly talented and highly aspirational women to client interaction, it lifts their sense of “this is potentially me, I can actually do this.”

“And having this level of accountability is what drives real change.”