By:
Luke Ritchie Follow on LinkedIn
The post-pandemic retail recovery has officially stalled. This week the Australian Bureau of Statistics published the preliminary headline retail sales data for the month of June.
Contents 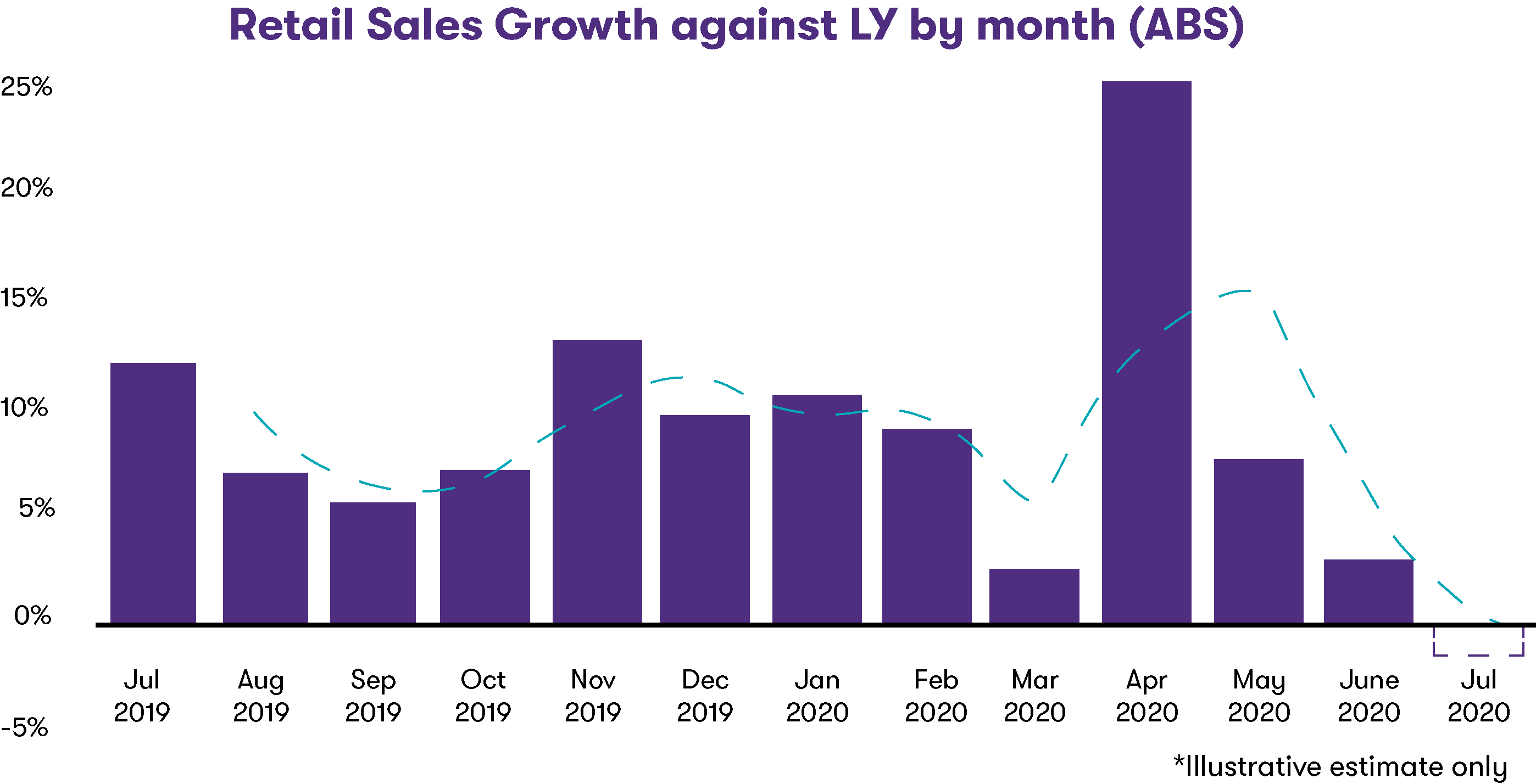 The strong retail growth exhibited throughout much of the past year has fallen away. And we know worse is to come once the July numbers are released next month.

Australian retail is currently running as a two-speed economy, with Victoria and New South Wales falls during June driving the decline. The other states are performing relatively well, led by Western Australia and Queensland. However, stuttering restrictions in these states may be starting to dent consumer confidence.

By sub-sector, only food retailing is maintaining its robust performance, and the lessons of last year are that supermarkets are facing a surge of customers during the Sydney and Melbourne lockdowns. Foot traffic fell across all other sectors, with non-essential retail operators recently closing their doors in the country’s two largest cities. Supermarkets are again facing overwhelming demand for online grocery deliveries, with customer support lines at Woolworths experiencing up to one hour delays.

Australian Retailers Association CEO Paul Zahra noted that the ABS figures were unsurprising given the restrictions in Sydney and Melbourne. “Lockdowns have a direct impact on consumer confidence and retail spending, and we fear the worst is yet to come with restrictions imposed across multiple states in July,” he said.

Whilst Australian retailers are being subjected to the chaos of incessant lockdowns, international retailers are enjoying the newfound freedoms of opening economies. The Wall Street Journal this week reported US retail returned to growth in June as restrictions in many states having been lifted in recent months. British retail enjoyed its strongest growth rate on record in the June quarter, with fashion, footwear and food leading the way.

Back in Australia, retailers are demanding that landlords share the cost of lockdown closures, claiming government support falls short of the mark. The Australian Retailers Association has been advocating for more support as retailers fear the impact of extended lockdowns, especially in Sydney. CEO Paul Zahra has led the chorus, noting that “whilst existing support arrangements are welcomed, it’s not enough to stem the losses. We need to see an urgent return of effective support schemes like JobKeeper and the Leasing Code of Conduct that were so beneficial in keeping businesses alive during the first phase of the pandemic.

Ultimately, the vaccination program is fundamental to moving beyond lockdowns and restrictions. Whilst it is encouraging that Australia’s fully vaccinated rate has quickly grown to 12%, we remain well behind comparable nations like the US, Canada and the UK which are all around 50%. The government must pull out all stops to radically increase vaccine supplies. It’s our only ticket out of this mess.