It’s time to bring Australian GST into the 21st Century

Twenty-eighteen marks the 100th anniversary of the concept of Value Added Tax (VAT). VAT was the brainchild of a German industrialist, Dr. Wilhelm von Siemens in 1918. One hundred years later VAT, which was devised to be efficient and relatively simple to collect and enforce, is together with Goods and Services Tax (GST) now in place in over 140 countries globally.

Our international indirect tax guide provides a snapshot of how VAT/GST is applied in 117 different countries and helps to highlight just how far Australia continues to lag in this space.

Australia adopted GST into the Australian tax system in 2000. While this occurred eighteen years ago, Australia was even then playing catch up on VAT/GST. Across the years, VAT/GST has evolved, and an arguably simple tax is growing in its complexity and application as the traditional goods and services model is replaced with digital content; virtual consumption and seamless international trade flows.

Globally, we are seeing many changes relating to registration and digital reporting requirements, the approach to audits and compliance by tax authorities and approaches to taxing the digital economy. In Australia there have been a handful of notable changes, including the ‘Netflix Tax’, however, we still remain behind the pack and our GST system is still largely unchanged to how it was originally introduced.

Further, the revenue currently being generated by the government from the Australian GST is insufficient for its purposes. While further taxation measures are typically an unpopular proposition to the general public and business, there is a global trend towards lowering income tax rates while increasing the rates for VAT, GST and sales tax. Tax authorities are realising that taxing revenue and actual transactions can raise more revenue than simply focusing on profit, which can often be subjective and subject to manipulation. Put simply, it’s easier to tax the transactions that create the outcomes.

While it can be said that no country has the perfect VAT/GST system, there are several examples of best practice from around the globe that Australia can look to. A strong example is the UK’s ‘Making Tax Digital’ initiative, which will mandate businesses to submit their VAT returns via an application programming interface (API) direct to the tax authority, either direct from approved software or via an API-enabled spreadsheet.

We are also seeing superior data analysis used by tax authorities for audit purposes in countries such as India and Spain. Here, tax authorities are comparing data submitted by different taxpayers, for example matching a customer’s claim for input tax on a purchase against a supplier’s declared output tax on the sale, to ensure tax compliance.

The above are just a few examples of the types of amendments Australia could look to integrate into our current GST system. However, the adversarial nature of Australian politics has hindered any significant reform. For any amendments to be made to Australian GST law, not only must they pass through the federal government, but the amendments must also be agreed upon by the states. While this has historically been troublesome, there may be potential for accord and reform if a change in federal government in the new year brings state and federal government into political and policy alignment. 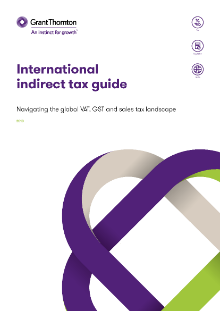