Insights: Corporate Social Responsibility is innovative marketing: have sex, save a life!

The latest tagline to hit consumers is ‘Have sex. Save a life. Save the world.’ And Grant Thornton's client, Hero Condoms, promotes it proudly.

Hero Condoms has seen the incidence of HIV/AIDS increase rapidly, particularly in Africa. For example, currently one in four people in Botswana are HIV positive and infection rates are growing. Dustin Leonard, founder and CEO of Hero Condoms, wants to make a difference. His company helps prevent the spread of HIV in Botswana by donating one condom to that country for every condom sold in Australia. Based on the success he’s seen with these one-for-one donations, Dustin is looking to expand the program to include anti-retroviral treatment for HIV-infected women who are pregnant.

Dustin was inspired by the actions of US company TOMS that has a one-for-one shoe donation program (for every pair of shoes sold domestically, the company donates a pair of shoes to a child in a developing country). He says, “It’s all about empowering the consumer: their purchases act as a catalyst to accomplish the change they want to see in the world – which people do want to do and is a growing trend.” He hopes Australian consumers will choose his product from among the many others that crowd the supermarket shelf and, by making that decision, help change the world – even if by only a little. Many small gestures together can make up one larger change.

The question for many Australian businesses is – will being socially responsible build brand awareness and increase sales? Dustin believes the answer to that is an emphatic yes, with corporate social responsibility practices (where businesses incorporate into their practice initiatives that benefit society) becoming increasingly embedded in business practice both locally and globally.

Sass & Bide is one Australian fashion house that has embraced the CSR ethos. Their Make-A-Wish range of limited edition jewellery has sold well since the duo first partnered with the charity in 2013. Make-A-Wish gives seriously ill children hope for the future, strength to face the challenges of their illness and joy from their incredible wish experience. Now in its 30th year, the organisation has given over 8,000 wishes to children facing life-threatening illnesses.

Another iconic Australian franchise, 7 Eleven, sponsors a number of CSR initiatives. Their 5-cent campaign is just one. In collaboration with impact entrepreneur YGAP, the group encourages donations of unwanted coins. With over $150 million of 5-cent pieces in circulation, their combined donated heft is used to give someone a better education, improved health outcomes or a hand up.

"It's empowering the consumer: their purchases act as a catalyst to accomplish the change they want to see in the world... which people do want to do and is a growing trend". - Dustin Leonard, Hero Condoms Founder

Witchery is another local business embracing CSR activities. An example is their point-of-sale products, where customers have the opportunity to donate 10% of the proceeds of silver giftware to supporting ovarian cancer research. Witchery is also a major corporate sponsor of the White Shirt Campaign. Funds raised from this campaign and the silver gift collection have enabled the Ovarian Cancer Research Foundation (OCRF) to appoint three full-time research scientists as well as buying vital medical equipment. More broadly, Witchery’s campaign has been instrumental in raising awareness of ovarian cancer, as well as providing funds for vital research. Its success is based on the simplicity of the message: 100% of proceeds from the sale of each white shirt go directly to the OCRF.

Globally, as consumers vote with their wallets and support such ventures, a growing CSR movement is evident, with more and more businesses adopting socially responsible practices. Internationally, the clothing chain Zara expresses its CSR credentials environmentally. It aims to reduce its energy consumption and recycles furniture and store decorations. Producing less waste and recycling hangers may seem trivial; however, on a global scale it’s anything but, with millions of hangers processed each year. Zara transport vehicles use biodiesel fuel and the company sources ecological fabrics and organic cotton. Zara has also declared that they do not test their cosmetic products on animals. 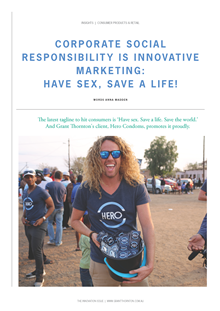