Insights: Disruption: Is tax about to change the way retailers do business?

E-Commerce has brought unprecedented freedom for retailers to sell, package and distribute their products wherever and to whomever they want.

However, major reforms to the way global businesses are taxed, following release of the G20's Base Erosion and Profit Shifting (BEPS)  action plan, are about to change what an efficient supply chain looks like.

As we explore in this article, many retailers, given a global customer base, large volumes of digital transactions and reliance on warehousing, will be exposed to the emerging tax environment. In addition, retailers who are household names are more vulnerable to reputational risks associated with perceived tax avoidance.

Let’s look at an example of a regional mid-market online retailer based in Singapore, manufacturing in China and selling to Australian customers. How might this by now standard business model be affected under the new tax approach?

Currently, it is both feasible and lawful to structure such operations so neither income tax nor GST is paid in Australia. This follows from a tax system that taxes companies based on location of business activities not location of customers, and a GST system that predates e-commerce. However, movements in the global tax environment may impose a local tax burden and possibly lead to double taxation.

A ‘no tax’ outcome from this model was tolerable when e-commerce was in its infancy. However, as the digital economy matures, governments increasingly view these arrangements as a significant threat to revenue. The G20’s BEPS Action Plan represents a coordinated global response to this threat. Importantly for retailers, the plan includes proposals to have greater regard to the location of consumers in determining taxing rights.

This coordinated approach is likely to harm Australian retailers in particular, who are constrained by a relatively small domestic market and who have much to gain from accessing a global customer base. E-commerce offers Australian businesses ease of access to international customers. Yet the BEPS Action Plan puts this at risk by making cross-border business expansion even more complex and expensive.

The Australian government is leading the way with the novel tax approach and has already enacted some of the proposals agreed at a global level. We now have the Multinational Anti-Avoidance Law (MAAL), effective from 1 January 2016, targeted at large international businesses. This is just the beginning of a series of expected changes that will impact how multinational businesses operate in Australia.

Large global retailers with tax efficient supply-chains are at risk of being caught out by the MAAL. The new law is couched in broad language and has the potential to hit retailers that have engaged in what used to be considered reasonable tax planning. However, it is not only very large retailers that need to take notice of the shifting tax landscape. Many smaller and mid-market Australian retailers also participate in the global market, facilitated by opportunities offered through digital distribution channels. These retailers should not assume that these changes are only relevant to the big end of town.

One of the changes expected to have significant ramifications for international retailers of any size is Australia’s approach to taxing supporting activities, such as warehousing, order fulfilment and marketing. Traditionally, business models have been able to place these activities outside the tax net; however, the new view defines such activities as key revenue drivers, with an expectation that tax should follow. We will see this approach become entrenched as Australia continues to renegotiate Double Tax Treaties with its trading partners.

This new environment is likely to mean that many international retailers will need to consider restructuring well-established supply chains.

In seeking to address taxation of e-commerce, governments are increasingly tempted by a consumption-led tax system. Just recently, the Australian government signalled its eagerness to amend the tax law in an attempt to keep up with the digital economy when it announced the so called ‘Netflix tax’, which will extend GST to digital downloads from non-resident vendors.

Further, the current ‘low value’ threshold, which exempts imports of less than $1,000 from GST, is scheduled for abolition. This will align the GST treatment of imported goods with the new approach to digital downloads and means imports will be subject to the same GST levy as domestic sales. For those retailers who operate on a largely domestic basis, this may serve to level the playing field. One obvious challenge for the government is how GST will be collected from businesses that, by definition, have a limited presence in Australia, or none at all. While companies like Netflix and Apple will find it difficult to fly under the radar, many non-resident businesses will be far less detectable, and less willing to voluntarily comply. Treasury is currently grappling with how to implement this expanded GST for smaller businesses. The outcome of these deliberations is likely to demand an innovative response from retailers, who will be looking to protect existing margins. This is likely to have a disproportionate impact on mid-size retailers who are less able to absorb a sudden increase in costs or new demands placed on their systems. It is likely that the ultimate solution to the problem will involve additional requirements for participants in the supply chain to withhold taxes, or withhold goods until the tax is paid. This is likely to place obligations on independent collection depots, which are fast becoming consumer favourites in the world of ‘click and collect’.

The name and shame game

To add further complexity, new transfer pricing reporting standards have been introduced with effect from 1 January 2016. These have been designed to uncover illegal profit shifting. However, tightening of tax legislation is only one method Treasury and the ATO are using to collect additional tax. The ATO has begun publishing financial information on companies in a move to publicly expose large revenue earners who pay little tax. In a social media-driven environment, few companies can ignore the potential damage to reputation that perceived social irresponsibility might bring. Retailers, for whom brand and public perception is paramount, are particularly vulnerable to the ‘name and shame’ campaign. Embarrassing highly successful low-tax paying companies has brought spectacular results in the UK. Big name brands like Starbucks have been driven to volunteering additional tax to salvage their reputation. While we are unlikely to see retailers volunteering to pay tax, we should expect brand protection to increasingly frame retailers’ approach to tax planning and tax compliance. Any retailers on the ATO’s list for public disclosure would be well-advised to pre-empt this by offering customers a more balanced picture of their approach to social responsibility. Explaining tax outcomes has suddenly become another task for PR departments.

These new strategies designed to tackle multinational tax avoidance will bring new levels of complexity for retailers already navigating the commercial challenges of operating in a global market. In particular, the ‘guilty until proven innocent’ approach to anti-avoidance legislation and public shaming will bring with it a unique burden. In many instances, early action will be needed to protect both margins and reputation. 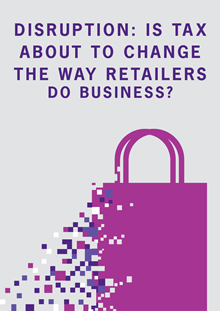