Insights: Vulnerability is the birthplace of innovation, creativity and change

With an economy shrugging off the commodities hangover and still sluggish, times are as tough as they’ve ever been in the notoriously competitive Australian retail market.

Added to this is the increasing attention from international conglomerates, who are circling the retail pool like a pod of hungry tiger sharks. Commercial realtors CBRE spotted the trend in 2010, when they estimated that around half of the top 25 international retailers would be in Australia by 2020, managing 18 brands from approximately 180 stores. While this scenario is still unfolding, local retailers have seen nearly a dozen international fashion brands establish themselves comfortably. Zara was the first, opening their Westfield Sydney store in April 2011, followed by a clutch of others in Melbourne and Adelaide. Hot on Zara’s heels were brands like H&M, Uniqlo and Muji (the IKEA of Japan).

The attraction for foreign retailers was and remains Australia’s relatively untapped retail market compared with established retail markets globally. As Stephen McNabb, head of research at CBRE noted recently, this low penetration rate minimises competition between competitors and supports high turnover – and Zara’s balance sheet proves the point. In their first year of operation, profits were among the group’s best and the brand continues to post healthy margins. Plus, with more and more Australians exposed to global brands through overseas travel, there’s an eager market for imported goods.

However, as our title indicates, the international invasion is, if nothing else, encouraging Australian retailers to innovate, and local success stories aren’t hard to find. Regardless of your ownership structure, the likes of The Good Guys, T2 and JB Hi-Fi all prove that success is still possible and retail remains an attractive investment proposition.

One of the key themes from CPA’s 2015 Finance and Accounting in Retail Forum was around innovation and connecting with your customers. Grant Thornton Audit and Assurance Partner, Louise Worsley noted at the time, “Innovation needs to be top down and across the whole organisation – small changes can make a big impact. Research what works and how it affects your ROI, and bring in external people if you need to. Collaborate and share ideas.”

A good example of this is electronics retailer, The Good Guys, who is going from strength to strength (they opened their 100th store in North Lakes Queensland in October last year), picking up a swathe of awards in the process, including the coveted Best-of-the-Best Retailer Award 2015 at the Retail Asia- Pacific Top 500 Awards in October for the second year running.

Focused on ensuring they have the right products, they’ve prioritised their relationship with their customers as they’ve broadened their product offering (customer service has been the company’s mantra since its inception in 1952). Once a white goods-only operator, The Good Guys has since expanded into kitchens, embracing social media along the way. Supplying all the kitchens to reality TV show The Block, “they’re really leveraging their position with their customers to be able to broaden their offering,” says Peter Thornely, Grant Thornton Financial Advisory Partner.

Another challenge for retailers who currently trade online is establishing the right mix between their online and bricks and mortar businesses, and how best to structure and integrate the two offerings: successful Australian retailers average 20 per cent digital business to 80 per cent bricks and mortar, and, importantly, seamlessly integrate the two.

JB Hi-Fi (one of Australia’s private equity success stories says Thornely), is an example of a store that does this well. With a loyal and strong customer base, the once-private equity owned company is now a successful ASX-listed company, a significant difference to the widely publicised demise of Dick Smith.

The key point, according to JB Hi-Fi CEO Richard Murray is to, as smoothly and coherently as possible, integrate high street operations with the online components of the business:

“JB Hi-Fi … is becoming more and more complex. We have the in-store and out of- store environment, and we now have a number of warehouses to support bulky goods and the Home [home appliances brand] rollout; we have a commercial business doing installation and fulfilment, so we need our IT systems to work in a more integrated way… We’ve kept our systems very focused on what’s important. The challenge moving forward in an increasingly complex world is keeping your systems simple.”

Other innovative moves by the retailer have been their Now music and video streaming service, their mobile apps and a retail site for e-books, along with bringing the Home product, launched in 2013, online as well.

That nothing stays the same is as true in the physical world as it is in the business world: “Evolve with the times and become strongest of your species or you’ll become extinct,” opines Scott Evans.

Rebel Sport is an example of this evolutionary trend, with a fast-moving product range that’s always in demand. Rebel has built customer goodwill using social media very effectively – Facebook in particular – and in the process has gained social media credibility, most notably in the way it has addressed customer complaints.

Online, Rebel concentrates on engaging and building a relationship with its audience (for those retailers still to venture online, this is a.k.a. your customer base), posting updates of match scores and the latest shots from big sporting events, with customers able to leave online comments. This milieu has rapidly become the natural habitat of Millennials, and those retailers with big ambitions that fail to innovate face, if not extinction, then an uncertain future.

T2 is another example of a company that has thrived on innovation. Once privately owned and now swallowed by global conglomerate Unilever for an undisclosed sum, the retailer succeeded in large part due to niche appeal – high-end gourmet tea aimed at younger drinkers. Quirky flavours demystified tea’s allure while unlimited free customer samples and distinctive branding (with different colours for different blends and funky in-store design), ensured the business grew rapidly. Grant Thornton’s Peter Thornely notes, however, that it would have been good to have seen T2 with the support of local private equity continue its growth trajectory before it sold out to Unilever.

Common to all these companies’ success in building a sustainable and profitable future is their customer savvy: knowing their customer base and knowing that what they offer is something their clients want. Together with this is that essential retail skill of crystal ball gazing, otherwise known as connecting with your customers and spotting retail trends – products that are innovative and will be in high demand.

Companies such as Swisse, Blackmores and Bellamy’s (a Tasmanian-based producer of organic baby food and formula), all exemplify this in the way they foresaw and then exploited a ‘perfect storm’ of factors.

The first was the wide-spread concern among Chinese people following the scandal of contaminated baby formula and infant deaths (with other Chinese food contamination stories following this in Western media) and their desire for a trustworthy and healthy, ‘clean, green’ substitute. The second factor was – and remains – the immense purchasing power of China’s burgeoning middle class.

Profits have soared off the back of these companies’ foresight, and the seemingly insatiable appetite for supplements and baby milk formula. Bellamy’s saw its share price rise almost sevenfold in 2015, and profits jump sevenfold, following the extraordinary demand from Chinese consumers for its formula, with entire shelves cleared of stock by canny, Australian-based Chinese, for resale when they return to or next visit China.

Meanwhile, Swisse was sold last year to Hong Kong-listed company, Biostime in a threeway bidding contest with Chinese drug manufacturer Shanghai Pharma and Chinese private equity firm Hony Capital for an impressive $1.67bn while Blackmores share price was trading (at time of writing) at $210.69, a phenomenal rise of 500 per cent since 2015.

The Australian retail scene has always been a highly competitive marketplace, with every business – traditional, online or omnichannel – fighting for the consumer dollar while at the same time stretching their own. Keeping up with the cost of new systems and software and managing online competition remain big costs, together with the old familiars, supply chain and inventory management.

While creativity and innovation have never been in short supply among Aussie retailers, finding and adjusting the right strategies for a marketplace in constant morph-mode remains a work in progress. Still, success is out there for those willing and able to innovate for a competitive advantage. 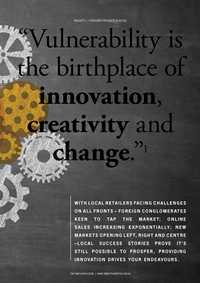