A retailer based in an area that is likely to be rezoned within three years has had their property valued at a current market rate of $20 million. An analysis on the property has added up to $20 million to the value should it be marketed as a residential development site. This is a prime example of where a retailer can create enormous opportunity through a joint venture development. 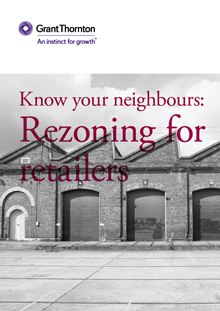 A partner specialising in the retail sector with Grant Thornton Australia. She spoke with John about the impact of property rezoning and how retailers should be thinking innovatively to capitalise and get ahead of the game before it's too late.

Angela: When we last spoke you mentioned the rezoning of existing outer-city industrial areas to residential. In particular you mentioned Waterloo and Rosebery, the fashion district of Sydney where a lot of big name retailers are located. Could you explain what the rezonings mean for these retailers?

John: In New South Wales the Roseberry/ Alexandria/Waterloo/Mascot area has become far more residential in the past five years, and this is due to people’s desire to live closer to the city and to transport hubs. Therefore, developers are prepared to pay far more for a site that’s currently zoned industrial, with the intention to develop it as a residential site in the future. Similar cases are happening across the country.

What areas are undergoing similar zoning changes in other states?

Melbourne east is starting to transform from being historically an industrial area to a more residential area. Places like Templestowe, Doncaster and Lower Plenty. Those areas will go through a similar transformation. Brisbane and suburbs to the north and south are also being transformed. Housing demand is strong in the inner Brisbane suburbs and the city. The Sunshine and Gold Coast markets have improved and seem to continually attract lifestyle residents and investors. These areas are going to have a greater value being residential than they would being industrial spaces.

When are these rezonings going to happen?

I don’t have a crystal ball, but I can assure you the way the Roseberry/Alexandria/ Waterloo/ Mascot areas have been tracking in the last five years, they will eventually end up as residential environments.

So what does that mean for retailers currently located in these areas?

Retailers need to plan now because in two to three years’ time, their options will be limited. By understanding what’s happening now, what will happen and what their options are, retailers can get ahead and seek future capital growth.

So what exactly do retailers need to do?

Well, there are a couple of opportunities here. Firstly, those who own property should consider their growth strategy. For example, do they want to increase capital for re-investment into the business by selling the property and leasing back? Or is it better to hold off for an opportunity to sell the property to a developer for a premium at a later date, taking all other
factors into consideration? They also have the option of redeveloping the site themselves, either in their own right, or in a joint venture. One scenario is they contribute their site and have the developer take the risk; the end result being that they get market value for their land, plus a share of the development profit.

Those who lease their property have the downside of being forced out of it at the end of a lease. However, this can potentially be turned around by investing in the property now to secure short-term facilities and a greater return on capital in the longer term.

Lessees also have another potential advantage in that the lessor may make an attractive financial offer to terminate the lease. Lessees are not obliged to move out until the lease term expires, and if the lease has an option, the lessee has the added comfort of extending the time before the owner can take possession.

Is there anything else retailers need to consider in their office and warehousing locations?

So can you give us any hints as to where these locations will be?

While I don’t know the exact locations, new and planned infrastructure is a major key. In Sydney the M2, the M5 and the M7 are examples of how major transport links influence the relocation of businesses and assist in opening up new land for housing. Once those transport corridors are built they add immediate value to surrounding properties. So look for areas that have easy access. Many industrial areas close to motorway entrances and exits will one day be prime residential areas.

Alternatively, look where population is centred, or where the major business districts are. The outskirts of these will be industrial areas, which will become future residential areas as the population grows and people seek to move closer to these growing business areas. This is currently occurring in the Penrith region in NSW.

Are you brave enough to predict the next fashion capital of Sydney?

The next major hub is Parramatta. It’s in a major growth phase right now; it’s identified as Sydney’s second CBD, and in the next five years it will be a very substantial business precinct. Penrith, Campbelltown and Liverpool will follow. Newcastle is going to go through the roof; and the Illawarra’s starting now, around Wollongong.

In closing, do you have any further insights for our readers?

Retailers should carry out a detailed evaluation of their property holdings. Whether they own or lease, what I would say to them is, assess your property commitments and investments and ask yourself these questions: