The Australian Government has introduced a new funding system for the Australian Securities and Investments Commission (ASIC), the ‘ASIC Industry Funding Model’, which will pass on greater compliance costs to Australian businesses.

Effective 01 July 2017, this model will allow ASIC to recoup its costs directly from regulated businesses through a combination of approximately 50 different industry subsector levies. Forecast to raise $240 million in 2017-18, the levy will be based upon a company’s activities within the financial year, and is charged on an ex-post basis six months after the end of the year.

For many businesses the true nature of these costs will not be known until the beginning of 2019 when ASIC will release the first levy invoices.

Who will this affect?

Large proprietary companies, public companies both listed and unlisted, credit unions, financial advisers and other professional service sectors regulated by ASIC will face new costs depending on the activities they are licensed to do and their market share.

The Funding Model consists of an array of basic levies for some industry subsectors and variable market-share based levies for others.

In many cases where there is a minimum levy alongside a variable component, ASIC will invoice businesses based on their license conditions rather than their actual activity in a subsector.

ASIC will calculate the levy burden on a business based on:

ASIC will impose the levy on an ex-post basis. For the 2017-18 financial year, ASIC will send invoices in January 2019, payable within 30 days.

For late payment, the legislation allows ASIC to impose a penalty of 20% p.a. of the outstanding levied amount, calculated monthly, for amounts paid after the due date.

ASIC also has the power to deregister companies or suspend the licenses of practitioners if they fail to pay the levy more than 12 months from due date.

Where a company’s AFSL allows them to act in a certain capacity, ASIC will invoice the licensee as if they are part of that subsector. In addition, these companies will face a basic levy on most forms submitted to ASIC.

As such, affected entities should note that they may fall within multiple subsectors subject to a levy, depending on applicable licenses held and activities conducted.

ASIC now has the ability to mandate submission of revenue and other data for the purposes of determining market share. This will allow ASIC to calculate the size of an industry subsector and the appropriate quantum of levy to impose.

ASIC has indicated that it will use data sources unique to the levied business sector to calculate the payable levy. Some of these data sources are external to a company (e.g. market capitalisation, ASIC license registers). Other subsectors (e.g. auditors, credit unions, responsible entities, and wholesale trustees) must collect and submit information ASIC deems necessary to calculate market share and the associated levy burden.

The data ASIC requires from each industry subsector will be clearer when ASIC releases this information later in the 2017-18 financial year.

Below is an outline of the calculation method and levy estimate for each industry subsector liable to pay a levy under the Industry Funding Model.

The levy calculation method for each subsector (basic; mixed basic and variable) is taken from the ASIC Supervisory Cost Recovery Levy Regulations 2017, registered on 29 June 2017. Minimum levies, as well as thresholds where appropriate, are also taken from the Regulations.

The estimated ‘basic levy’ and ‘amount to raise’ quoted for each industry subsector come from ASIC’s document Proposed Industry Funding Model for ASIC: Supporting attachment to the Government's Proposals Paper 1, released in November 2016. To date, this is the latest information the Australian Government has provided to assist stakeholders to calculate their levy burden.

The estimates do not include individual compliance costs for collating and submitting individual data ASIC will use to determine market activity and calculate individual entities’ levy obligations.

Where the subsectors in ASIC’s November 2016 paper are largely identical to those in the Regulations, we include an estimate of the levy charge on a representative company in that subsector, based on ASIC’s estimated amount to raise and number of leviable entities. However, where the subsector definitions differ significantly between November 2016 and June 2017, we have not included an estimate of the cost to a representative company. 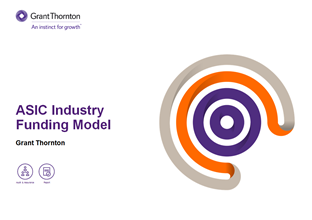 In response to the commencement of the Industry Funding Model, ASIC proposes to remove fees for forms including but not limited to the following:

[2] Treasury has previously advised different estimated basic levels for disclosing and non-disclosing public unlisted companies, but this is not made clear in the Regulations

[3] Companies with market capitalisation over $20 billion will be treated as if their market cap is $20 billion.

[5] The Explanatory Memorandum to the Regulations states that for responsible entities, superannuation trustees and wholesale trustees, the amount of funds they have under management for the purposes of the levy calculation will not include any investments made between each entity to other unregistered managed schemes issued by the entity.

[6] Regulations s34 (4) states that “[r]evenue is to be calculated for the purposes of this section in accordance with accounting standards in force at the relevant time (even if the standard does not otherwise apply to the financial year or some or all of the entities concerned)”.