Life Sciences sector booming and more buoyant than ever

AusBiotech, supported by Grant Thornton, has released the eighth annual Biotechnology Industry Survey – which this year revealed a renewed ­sense of optimism and strong potential for the industry to play a larger role in Australia’s economy.

Key findings from the report:

Business sentiment across the industry is the strongest on record. The Survey shows another jump, to 77 percent, in the number of companies reporting that last year (2017) was an ‘excellent’ or ‘good’ year. The vast majority (87 percent) expect their business to grow in 2018, a significant jump on last year’s result and no respondent expected their business to contract.

A record 37 percent believe the Australian operating environment remains conducive to growing a biotechnology business, adding to 47 percent that felt the environment was neutral.

The employment outlook for 2018 has strengthened to the highest on record, with 73 percent of companies indicating an intention to hire, up from 64 percent in 2017.

The magnitude of the Australian life sciences sector  (232,213 people employed) across 1,654 organisations, represents 1.86 percent of the labour force and is comparable to the Information Media and Telecommunications sector that represents approximately 1.73 percent (215,000 people) and the Mining sector, which accounts for 1.74 percent (or 216,500 people).

The life sciences sector is a significant economic driver for Australia

Globally, Australia has a well-deserved reputation for quality, innovation and expertise in the life sciences sector. Once dominated by human therapeutics companies, the mix has evolved to include the larger and fast-growing medical technology (devices and diagnostics), and digital health sectors, as well as the steadily-emerging agriculture and food technology sector.

With respect to industry credentials, there are currently about 140 ASX-listed life sciences companies, with a market capitalisation of more than AU$50 billion.

“A convergence of industry maturity, deal flow, regulatory advances, increased capital and development programs makes this the most buoyant I’ve seen the sector in my near-decade-long tenure at AusBiotech. The survey data agrees. The opportunity is ours to further build this industry towards its potential as a driver of our economy and quality of life,” said Lorraine Chiroiu, Chief Executive Officer, AusBiotech.

Capital raising in 2017, however 2018 is a year for consolidation and growth

There was a return to capital raising among Australian biotech companies in 2017, with a huge AU$1.073 billion raised to 31 December 2017, the second largest amount this decade (AU$1.153 billion, 2015). Nearly half the respondents indicated they actively sought funds in 2017, which compared favourably to the 43 percent that confirmed a focus of capital raising in 2016.

Funds flowed in through the Medical Research Future Fund and its AU$500million Biomedical Translation Fund (BTF). The R&D Tax Incentive scheme continues to facilitate investment in biotechnology, though it is underpinned by feelings of uncertainty as companies grapple with potential caps to tax refunds and policy changes.

In addition, we saw ten biotech companies listed on the ASX in 2017 joining the 130+ existing listed life sciences firms.

“We have seen innovative and exciting developments in the life sciences sector over the course of 2017 – from clinical trials and technological developments through to investment and acquisitions. In 2018 there is likely to be a cooling in activity. Nearly a third of the companies (32 percent) surveyed indicated they would not be undertaking capital raising, while a further 23 percent said that capital raising was only a possibility. These numbers are roughly comparable to 2016, which was widely interpreted by market participants as a year of consolidation,” said Michael Cunningham, National Head of Life Sciences, Grant Thornton Australia.

The strongest new policy theme to come from the survey was industry-specific skills and experience, and talent attraction and retention, which was brought into focus with the sudden and damaging tightening of skilled migration visas in April 2017. Skilled visas are a widely-used tool by the industry to fill the skills gaps that exist in Australia. In this instance the gaps are in research and senior industry executives that are highly-skilled or experienced jobs that upskill the local talent pool.

“With a buoyant and booming biotech sector, the question of skills is front-of-mind for some biotechnology companies with global experience and skills simply not available in Australia. The skills restriction was thankfully wound back in response to advocacy from AusBiotech and the wider sector but it does highlight the need for consultation with industry that the Government is now undertaking,” Lorraine Chiroiu said. 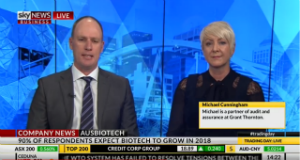 Responses were received from 30 companies. In addition, over 80 companies participated in the roundtable discussions, held in Sydney, Melbourne, Brisbane, Adelaide and Perth.

About AusBiotech
AusBiotech is Australia’s biotechnology organisation, working on behalf of members for more than 30 years to provide representation and services to promote the global growth of Australian biotechnology. AusBiotech is a well-connected network of over 3,000 members in the life sciences, including therapeutics, medical technology (devices and diagnostics), food technology and agricultural, environmental and industrial sectors.