Providing opportunities for the next generations

Hammons Holdings has owned and operated Scenic World, located in the World Heritage-listed Blue Mountains, for more than 73 years. In 2018, the NSW Government appointed Hammons Holdings as the new operator of Sydney Harbour Bridge Climb.

As third generation Australian family business, it has successfully managed the transition to new leadership twice before, with Philip Hammon handing the reins to son David and daughter Anthea in 2011.

This is Philip’s story.

Philip Hammon was the second generation head of the family business Hammons Holdings, taking over from his entrepreneur father, Harry Hammon, who saw the potential in a disused coal mine railway and converted it into a world-renowned tourist attraction.

Philip retired from day-to-day responsibilities in 2011, and son David and daughter Anthea remain in charge today. Philip remains on the Hammons Holdings board of directors, as well as chairing the Hammon Family Council.

A “challenging” few years is an understatement

The past 2 years have been “challenging for the family and the business” says Philip.

First came the bushfires of the 2019/20 summer which ravaged south-eastern Australia, including the Gospers Mountain fire front which burned over 500,000 hectares, equivalent to 81% of the Blue Mountains World Heritage Area. It was Australia’s largest bushfire in recorded history.

At one stage the fires threatened to wipe out Katoomba and forced the Scenic World attractions to close during its normally high volume Christmas holiday period. Not to mention coming so close to the Katoomba home shared by Philip and his wife Peta that a fire truck was stationed for two days in his backyard overlooking the Jamison Valley.

It wasn’t the first fire which has threatened the family’s livelihood “and it probably won’t be the last” says Philip.

But no sooner had the business commenced its recovery from the fires, another natural disaster took hold – the COVID-19 pandemic.

Both the Scenic World and Bridge Climb businesses traditionally derive more than seventy percent of their revenue from international visitors, and their revenues have been hit hard by the spread of the COVID-19 virus which has completely curtailed international tourism since March 2020.

We spoke to Philip about how the family and the business has been able to cope against odds that would have pushed many other businesses to the wall.

Many families see themselves as custodians of their family enterprise, nurturing and protecting the assets for the benefit of generations to come. The Hammons decided early on that this was also their preferred pathway.

“We’ve had plenty of knocks on the door from potential purchasers, but we’d like to think that our children’s children will have the same opportunities we’ve had” says Philip.

Taking a long term approach also means that the family has spent decades re-investing profits into its business assets, ensuring their attractions are modernised and meeting the highest safety levels. While their bank has supported them in funding the various redevelopments, the family has been careful to only borrow when necessary, and to repay borrowed funds as quickly as possible.

This approach has created a strong company capable of withstanding unexpected hurdles. “We don’t make decisions for this or the next quarter, we’re looking at 5 and 10 year time horizons” says Philip, "but the immediate cash flow impact has been a huge challenge, particularly as like many other tourism-reliant businesses we have had only limited government support."

Resilience and good governance are integral

Being able to make good decisions under pressure is critical for a business and also the family that operates it.

“Creating our Family Constitution allowed the family to agree on policies relating to the business, at a time when the business was performing strongly” says Philip. “We could also decide on how our family values should be reflected in our operations, so if business conditions changed we knew we could stay strong together”.

Currently the Family Council comprises Philip and Peta and their five third generation adult children, but they have already started to involve the fourth generation by creating a learning pathway about the business and its origins. The family also includes the non-bloodline family in-laws in regular Family Forums which disseminate information appropriately.

One decision made by the Family Council was to professionalise the business board with the addition of independent, non-executive directors. Two NED’s remain on the board today, one of whom acts as Chair.

“Our external directors have been invaluable and we might not have gotten through this period without their counsel” says Philip.

Planning for succession starts with a decision to make a plan

Another decision ratified by the Family Council was to create a transition plan for Philip and Peta. Philip says that at the time of his retirement as CEO in 2011 he “was ready and willing to take a few steps away, and to give David and Anthea the same opportunity I’d been given”.

But like many family firms, they realised that much of their personal wealth was tied up in the business and its assets, and a plan was required to provide them with a separate and reliable source of income in case dividends from the business were for any reason put at risk as has proved to be the case in 2020 and 2021.

A transition plan was enacted over several years which created a separate investment fund for Philip and Peta, and with dividends from the business having been curtailed under current business conditions, their timing in putting this plan into effect could not have been better.

“Initially we probably believed that the business would just carry on how it always has, but our advisers were quite persistent in helping us to understand the importance of a transition plan” says Philip. “Given recent events, we’re very glad we listened to them.”

Robert is a family enterprise and succession planning specialist who is a fully accredited Specialist Advisor Member of Family Business Australia, the peak body representing family business and their advisors in Australia. Robert is a regular speaker on family enterprises and SME-related issues, and has been frequently interviewed for publications including the Australian Financial Review, Business Review Weekly, and The Australian. 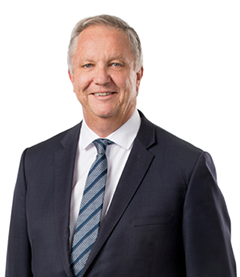