The digitisation of the economy has had a profound impact on the banking sector. Online banking – which as recently as the 1990s was still a niche dominated by tech early adopters — is now at the heart of modern banking.

Numerous recent consumer surveys have found that not only do online channels now dominate the way consumers interact with their banks in terms of volume, but satisfaction rates with digital banking are also higher than other channels.

Given the rapid growth of online banking services, it is easy to think of digitisation as little more than a tech arms race that naturally suits the biggest players. But the reality is that recent developments in digital banking offer significant opportunities for small and mid-size financial institutions to seize the technology and lead the charge.

A recent survey of American banking executives undertaken by Grant Thornton found that although technology was facilitating an innovation revolution in banking services, strong customer relationships are still the most important factor in long-term success.

Community-based banks and credit unions — who frequently have a closer connection to their customers — are at a natural advantage in this space. The key to taking advantage of the strength of these relationships lies in being able to connect knowledge about customers’ needs and wants with the technology and processes to meet them.

Smaller financial institutions may need to source external advice and assistance on the technology and governance side of the equation, but it is the customer relationships that are key.

The longer technology exists, the more affordable it becomes — whether it’s consumer electronics, cars or computers. The same is true of online banking. The sophisticated platforms that were once the sole purview of the big end of the market are now firmly within the reach of smaller players.

In fact, so much functionality is now affordable for banks of all sizes the bigger challenge is not so much figuring out how to pay for it, but deciding which options are actually useful for customers.

Creating a digital roadmap can help banks and credit unions define which online services will help to both retain existing customers while also reaching out to potential new ones. A digital roadmap can also help manage the transition to new technology, both from an internal and external perspective.

Size can deliver significant strengths: additional resources, more brand recognition and greater influence to name just a few. The Big Four banks are huge organisations. The NAB’s annual revenue is greater than the GDP of Cyprus. But size also brings with it significant weaknesses: bureaucracy and the enormous expense required to upgrade legacy systems makes them slow to change.

Small and mid-size financial institutions such as mutuals and credit unions can be more nimble and respond faster to emerging technology and customer trends, allowing them to outflank their larger competitors. However it’s vital that agility doesn’t drift into recklessness. A vital part of any technology project is risk management and that is especially true for newer technology and even more so, in financial services.

It is worth investing in expert, external advice when considering new technology. Not only can this advice determine whether or not any new direction will lead to improved customer outcomes, it can also ensure the transition is managed as seamlessly as possible.

The changing role of branches

Online banking hasn’t led to the end of branches, but it has substantially changed the role they play. Whereas branches once focused primarily on facilitating transactions, now they frequently play a much broader role. This can include everything from providing financial advice to small business support to assistance with applications.

Some branches are even shifting their focus away from banking to a degree, instead positioning themselves more as community hubs. Once again, smaller banks — especially those in regional areas — may find this approach can deliver significant competitive advantages.

The Disruptive Potential of Blockchain

Although still in its infancy, blockchain and digital currencies such as Bitcoin have the potential to replace the transactions currently performed by banks. By removing the necessity of the bank as the middleman, blockchain allows people to exchange money directly using digital currency that is both secure and anonymous . Blockchain can also move currency, store currency, lend currency, trade currency, account for currency and so on, making the potential for disruption, or transformation, of the financial services industry significant.

Instead of rejecting blockchain, many banks are currently investigating how they can use the technology to their advantage to reduce costs, speed up transaction times and offer a single world currency.

The digital economy offers so many potential options for medium-sized financial institutions, the real challenge is in finding the right space to play. Some banks are choosing to go one hundred percent online after ascertaining their customers didn’t highly value in-branch banking. Others are instead expanding their branch footprint in order to facilitate community outreach.

The most important thing to ensure in navigating the disrupted waters of the modern economy is to have a well-considered plan informed by a deep understanding of who your customers are and what they need.

To see how leading banks in the United States are adapting their business models to ensure future success in the disrupted world of modern banking, download The future of growth and the banking industry report authored by our Grant Thornton US colleagues here. 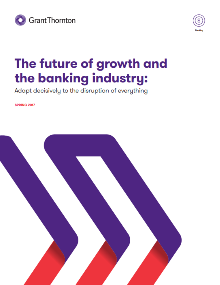