The success of modern manufacturing lies in value-adding, IP and new markets

By:
Mark Philips,
Richard Nutt
The Government has a 10 year plan to implement the Modern Manufacturing Initiative and develop our local manufacturing capability to service both the domestic market, but to also increase our contribution to international supply chains.
Contents

While this will help reverse Australia’s trend of offshoring, creating a modern manufacturing economy is so much more complex than simply hitting a two, five and ten year milestone.

For instance, if you’re looking for investors to support your growth journey beyond the initial funding from the MMI, they’ll be looking for a shorter return than the decade mapped out. And of course, we need to make sure we have the trade partnerships and supply chains in place to help the domestic and international markets hum.

The six identified priority sectors are areas of strength the Government would like us to be “famous” for – however, there are significant opportunities to streamline our current manufacturing processes, value-add here for a greater return, and build some much needed self-sufficiency and sovereign capability into our economy well beyond the priority six.

To be successful, we need to have a diverse range of trade partnerships. Interestingly, the MMI was launched around the same time Australia became a signatory to the Regional Comprehensive Economic Partnership – the largest free trade agreement with 15 of our key trading partners. In addition, we’re looking to open up new, non-traditional markets for trade, including the UK – surely a sign we can trade in more than just expats? In fact, the increase in exports of Australian wine to the UK, Europe and the USA has helped to dramatically offset the reduction in wine exports to China.

The timing is right. COVID has identified weaknesses in supply chains and relationships all over the world. Brexit has seen the reshaping of trade and partnerships within Europe – creating opportunities for those outside the EU bloc to participate in trade. Innovations in products means our perishable food and beverage sector can travel further. Our medical innovations can support growing (and aging) populations around the world. We already export medical devises to the USA – can we increase this? Technological advancements, much to the frustration of tax jurisdictions, are transborder, translational, and transformative. Technology underpins it all.

The opportunity ahead of us – and where we hope to hear more from the Government – is how they will open up new markets both locally and offshore for Australian producers, products and services. There’s certainly more than one way to structure a trade partnership. In addition to the better known tariffs, there are also non-tariff barriers which can be structured in a mutually beneficial way for both markets which is perhaps under-explored to this point.

For example, Australian seafood exports to Japan. Despite the presence of a Free Trade Agreement, they still operate a quota regimes – potentially limiting the amount we can export. Having said that, it doesn’t appear we’ve taken advantage of the opportunity to import a reciprocal amount of seafood from Japan.

Get the dynamics right with our Free Trade Agreements and we can simplify processes, create level playing fields and create new opportunities for companies to enter new international markets. 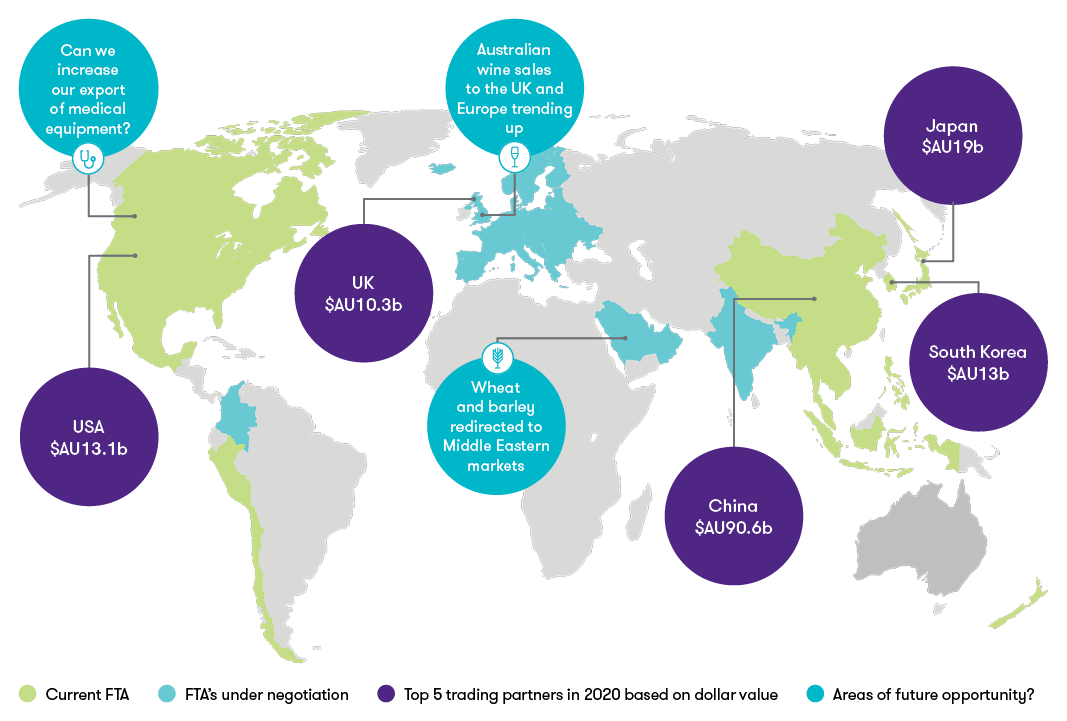 It’s not just sending stuff overseas. It’s generating value at home as well. You will have heard this a lot – “value add”. It isn’t just a gimmick or a slogan. It’s where the economic benefit in production lies. And Australia has an opportunity to ramp this up significantly.

We missed the boat on certain raw materials. Iron ore would be the classic. Bauxite wouldn't be far behind in that we don't do a lot of value add to aluminium based product. However, lithium is a new market ripe for development. Lithium is used in battery powered vehicles (a growth market in its own right), batteries for commercial and domestic use – it’s in our mobile phones, laptops, tablets and digital cameras. And we have the second largest “mine reserves” of lithium in the world. We should make the batteries here, “value add” here, rather than export raw lithium to be processed elsewhere. Investment in technological innovations and automation will help keep the production costs on par with overseas markets. It creates more jobs. It creates more value and a greater return to the Australian economy.

A different approach needs to be taken to how we value add to Intellectual Property (IP). Australia's got a sensational track record for the development of IP, whether it be in smelting technologies, or WiFi technology, there are a lot of areas where Australians lead on innovation. But we haven't incentivised those who locally innovate to value add domestically. This is where the great brain drain comes from – our tech start-ups enticed overseas because we haven’t provided the framework to keep them in Australia. However, the MMI is clearly underpinned by technology. So are we about to see a shift?

At present we have a good system to fund the development of IP through our R&D tax incentives, grants and support programs, but we don't tie this to an obligation to commercialise (or value add) that IP here. We’d love to see some smart thinking from a government perspective on how we can do this because it could have a significant impact on our competitive advantage.

The future is all IP

Regardless of whether you’re eligible for the MMI or you’re in one of the priority six sectors, it’s clear the future of business is technological and IP driven. A challenge for businesses is to understand the inherent value of their IP; safeguard it, nurture it and leverage it.

There will undoubtedly be some friction as we settle into a modern manufacturing economy – which comes with new ways of doing things and changes to the roles available. Automation takes away the need to physically handle products or watch machines. But with automation comes the skills to program robotics. It comes with the skills to look at pushing the limits of the automation process to see whether or not we can further automate or effectively produce product to a greater degree of complexity than we currently are. We're the masters of creating bespoke; which is products of one. And that is definitely the opportunity if you're going to get improved profits, greater margins and greater satisfaction.

It also means your people become even more of an asset. There is knowledge in that head and the growing danger to companies in future will be that knowledge walking out the door. We will see more clever employment contract types, like share schemes, which incentivise people to not only contribute to the company but create protections around IP so it doesn’t end up in the hands of competitors, or ends up being used to create a competitor.

What’s most exciting about the current modern manufacturing policy is that it can help create an equal platform for small, medium and large companies. The masters of the bespoke, the IP generators, the job creators will be our small and medium sized companies. The co-investment from the Government for innovation hubs and testing facilities will provide opportunities for collaboration while also protecting differentiating IP. The large companies, particularly those with global footprints, also need to be enticed to set up and stay in Australia. This could be large pharmaceutical companies, or it could be a large business that produces raw material that smaller counterparts can value-add domestically. Global investment in local manufacturing will influence the success of manufacturing in Australia. It’s an ecosystem that relies on the health of all parts to thrive.