Queensland Sugar Limited (QSL) holds voluntary agreements with seven Queensland sugar millers to market their export raw sugar, making QSL responsible for over 90% of the raw sugar exported from Australia. Mills not contracted to QSL have been marketing their sugar independently.

There is a widely-held belief that, once existing marketing contracts with QSL expire, these businesses will independently market the sugar they produce. Singapore-based Wilmar Sugar (one of the world's largest sugar traders) has advised it will be exiting the voluntary QSL marketing arrangement in 2017.

Wilmar’s decision and the potential flow on effects are likely to impact many key stakeholders including:

This move has prompted lobbying from Canegrowers, (a lobbying, representative and services group) and from The Hon. Dr John McVeigh, Minister for Agriculture, Fisheries and Forestry who has initiated an investigation into the potential legislative solutions and requested action from the Federal Government.

A Senate inquiry has recently been announced and the corresponding report is expected to be released by 27 November 2014.

Read our detailed summary on the impact of Wilmar exiting its agreement with QSL will have. 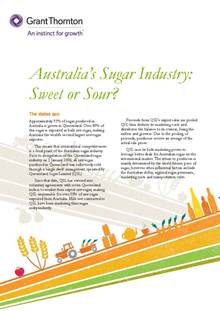