Insights: The internet will eat your business

Disruption is a wonderful thing - unless you're on the wrong end of it. Controversial commentator Andrew Keen considers the adverse impact that radical technologies will have on mid-size companies.

I recently interviewed Hans Vestberg, the CEO of Swedish telecommunications giant Ericsson, who told me that every morning he imagined how he could reinvent his company. Every CEO, particularly of mid-sized companies, should take Vestberg’s wisdom to heart. Digital technology has unleashed a perpetual hurricane of creative economic destruction. Software is not only eating the world, but also many mid-sized businesses. Only the paranoid will survive, and here is why.

The long term used to be a nebulous dot on the horizon – like the Brazilian economy – that was perpetually about to change everything. But today, time has been so speeded up by technology that whatever once appeared long-term is happening now. Take, for example, the robot economy – once the preserve of science-fiction writers. Today, however, what is now known as artificial intelligence or machine learning is about to change every industry – from education to healthcare to transportation.

The future is here and it's not evenly distributed

This is a quote from the cyber-punk writer William Gibson, and he was right. From Google’s self-driving cars to Amazon’s drones to the Apple Watch, we are now all living in the perpetual future. And with Moore’s Law showing no sign of ending, more and more seemingly impossible technologies are about to not only be plausible, but inevitable. These technologies will radically transform entire industries, making some redundant and creating new verticals, new scarcities and new business opportunities.

Every company is a technology company

There is no escaping the consequences of technology’s rapid evolution for any business. ‘Ah, but my company isn’t a technology company,’ some CEOs of mid-sized companies will say. ‘We don’t need to worry about technology,’ they will reassure themselves. ‘It doesn’t affect us.’ Wrong. As Reid Hoffman, the co-founder of LinkedIn and one of Silicon Valley’s most prescient investors has said, every company is now – like it or not – a technology company. From the impact of 3D printing on the traditional manufacturing industry to the impact of wearable technology on the fashion business and self-driving cars on the transportation industry, networked technology is radically disrupting every sector of the economy. Medical, education, government, energy and banking are all about to be revolutionised.

The long tail was an illusion

Many of the internet’s most fervent evangelists promised that the digital revolution would democratise business life, creating more small and mid-sized companies that could all thrive in what has become known as the Long Tail economy. But the Long Tail is, in truth, a long tale. The digital revolution has created a winner take-all economy of neo-monopolists like Google, Facebook, Apple and Amazon. Digital technology – particularly the distributed technology of the internet – is creating a new aristocracy of digital companies that are attracting the attention of antitrust legislators in Europe and the United States.

The biggest threat of all: Monopolies

Mid-sized companies should beware. You are the roadkill of the new economy. ‘Average is over,’ the American economist Tyler Cowen thus wrote about a networked economy characterised by a tiny handful of dominant companies. The impact of this winner take-all economy on smaller businesses is deeply troubling and CEOs of these smaller companies need to be very worried about the viability of their businesses. Every industry now is threatened by massively financed upstarts seeking to hollow out an economy traditionally dominated by mid-sized companies. Uber, for example, threatens to sweep away tens of thousands of midsized taxi companies. Airbnb may well represent the death knell of thousands of mid-sized hotel chains. That’s why, of course, Uber is now valued at around $40 billion and Airbnb at around $20 billion.

The Internet Is Not the Answer, by Andrew Keen, is published by Atlantic (£16.99). 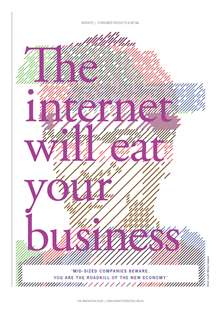 Interested in more from our Insights: The Innovation Issue magazine for the consumer products & retail industry?