A Safe Harbour, but for who?

‘Safe Harbour’ legislation was passed in September, offering protection to directors from insolvent trading exposure. Is this the big reform that will encourage entrepreneurship and provide a platform to protect (or “harbour”) business value in Australia?

Existing insolvent trading laws will remain in place, however the new laws will protect directors when continuing to trade companies of questionable viability, provided:

The director will have the burden of proving on the balance of probabilities whether a course of action is ‘reasonably likely to lead to a better outcome’ (at the time of the decision). The Bill provided a list of indicative factors to be considered including whether the director has:

An added layer of protection against abuse of the system is that where the restructuring plan fails and the company enters liquidation, the Safe Harbour would only be open to compliant directors who assist the liquidator. One would suspect that these provisions were focused more on encouraging compliance by SME directors than the boards of publically listed companies.

It has been argued that Australia’s insolvent trading laws are driving directors to limit personal liability by prematurely seeking the appointment of voluntary administrators. However the long term trend in Voluntary Administration (VA) appointments over the last decade suggests that this may not necessarily be correct:

So why have VA’s declined in relevance? Whilst VA’s are still in vogue for larger enterprises (Network Ten, Top Shop, etc.), the decline in VA’s for SMEs (which represents the vast majority of insolvency appointments) is arguably attributable to the erosion of value that often follows a formal insolvency appointment (termination of critical contracts combined with substantial professional fees).

Who are the real beneficiaries of the reforms?

Directors of publicly listed companies are generally provided with professional advice to ensure the corporate veil is preserved.   By contrast, directors of small businesses are generally poorly funded and already personally exposed to the company’s liabilities by way of personal guarantees provided to banks, suppliers and landlords.   Somewhere between these two extremes sit directors of midmarket businesses (MMB’s), who may be the major beneficiaries of the reforms.

What are the challenges to rescuing a distressed business?

According to ASIC, in 2016 the top three nominated causes of failure for companies were:

(b) poor strategic management of business (45.6% of reports); and

(c) poor financial control including lack of records (33.6% of reports).

A transfer of business ownership can provide a quick fix to each of the above and may prove the dominant strategy pursued by SME’s under the Safe Harbour regime.

Will the Safe Harbour reforms develop a business rescue culture?

The ‘light’ of Safe Harbour reforms will shine brightly in the media over the coming months and should improve the efficiency of Australia’s insolvency regime and stakeholder outcomes. Whether the light endures in in the minds of SME / MMB directors will ultimately depend on whether professionals advising in this space can offer robust and achievable strategies to repair, re-stock and re-crew a distressed ship. 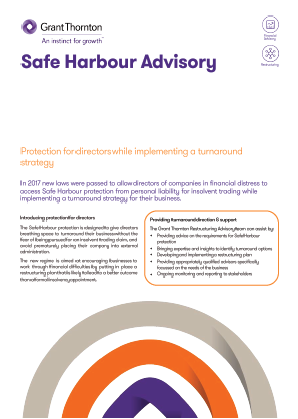