Welcome to this third edition of Dealtracker, our analysis of the Australian mergers and acquisition (M&A) and equity markets. This edition covers transactions during the 18 month period from 31 December 2012 to 30 June 2014. Our key insights include:

Improving confidence
The global economic outlook is improving and this is being reflected in the financial markets, with increased deal levels, higher listed company share prices and an extremely robust Initial Public Offering (IPO) market. On a particularly positive note, the level of funds raised from new ASX listings in the 2014 financial year was higher than in the boom years immediately prior to the global financial crisis.

Overseas buyers
Australia has continued to attract strong international acquirer interest with at least 26% of Australian targets having overseas acquirers. The overseas buyers were particularly prevalent in the larger deals and were paying higher multiples for businesses across most industry sectors. Many of the international acquirers came from either the United States (US) or Europe and were seeking to benefit from the growth prospects in our region. Companies from the People’s Republic of China (PRC or China) were also active buyers and were interested in our resources and food sectors.

Investment Managers
Whilst Investment Managers (IM) (Private Equity or Infrastructure) were buyers in less deals than in prior periods, they paid some high multiples for businesses in strong growth sectors of the economy such as, Infrastructure, Aged Care, Education and specialty retail segments where there are expected to be “tail” winds.

Period of exits
A lot of the M&A activity that occurred during the period was compelled by  Corporates or Private Equity (PE) firms seeking to exit investments. In some of the largest transactions, Corporates were divesting non-core businesses to strengthen their balance sheets. PE firms were exiting portfolio investments held through the global financial crisis, with the IPO market being dominated by PE sponsored exits. PE firms
were also the sellers in a number of sizeable Australian M&A transactions.

Following this period of relatively high levels of exits, we expect that much of the future M&A activity is likely to be driven by Corporates and PE firms seeking new investment opportunities.

*based on transactions where deal multiples were available. 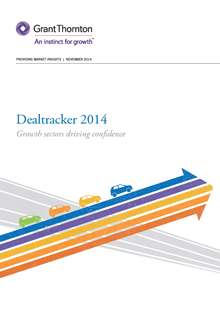 Click on the following links to view previous Dealtrackers: